The European Court of Human Rights today unanimously condemned Russia for enforced disappearances in three cases from Chechnya, Russian Justice Initiative said. The cases concern the disappearance of five men between November 2002 and April 2003 in different locations in Chechnya.

Khadzhialiyevy and Others v. Russia (3013/04) concerns the disappearance of Ramzan and Rizvan Khadzhialiyev. The brothers were arrested by Russian servicemen at their home in the village of Samashki, Chechnya, before dawn on 15 December 2002. Four days later their decapitated and dismembered bodies were found in a field near Sernovodsk, approximately 10 km from Samashki.

Magamadova and Iskhanova v. Russia (33185/04) concerns the disappearance of Viskhadzhi Shatayevich Magamadov and Khasan Shakhtamirovich Mezhiyev in Mesker-Yurt, Chechnya. The two men have not been seen since the early hours of 14 November 2002 when they were taken away from Viskhadzhi's home by Russian servicemen on armored personnel carriers.

Tsurova and Others v. Russia (29958/04) concerns the disappearance of Ibragim Isayevich Tsurov, a Chechen lawyer. Although the domestic investigation established that Ibragim was detained by officers of the Malgobek District Department of the Interior on 26 April 2003, there has been no news of Ibragim since his arrest.

"The state did not only fail to help us but even put obstacles in the way, had we not insisted the investigation would not have been conducted at all", said the wife of the disappeared Viskhadzhi Magamadov after today's judgment in the case of Magamadova and Iskhanova.

In today's unanimous judgments, the Court held that:

·    The right to life had been violated in respect of the disappeared persons who must be presumed dead (violation of Article 2 of the European Convention on Human Rights);

·    The Russian authorities had not conducted an effective investigation into the disappearances (violation of Article 2);

·    The disappeared men had been illegally detained (violation of Article 5);

·    The manner in which the complaints of the applicants were dealt with by Russian authorities constituted inhuman treatment (violation of Article 3);

·    The applicants did not have access to an effective remedy before Russian authorities for the violations (violation of Article 13);

The Court awarded the applicants in the three cases a total of 195,500 euro for pecuniary and non-pecuniary damages.

The applicants in the cases of Khadzhialiyev and Others, Magomadova and Ishkanova, Tsurova and Others were assisted in bringing their applications to the ECtHR by Russian Justice Initiative.

On 18 September 2008 the European Court of Human Rights announced its 10,000th judgment, Takhayeva and Others v. Russia (no. 23286/04), which unanimously condemned Russia for the enforced disappearance of a twenty-year-old man in Chechnya in November 2002. The applicants in that case were also represented before the Court by Russian Justice Initiative.

On 14 November 2008 the Court will announce its judgment in a case concerning the extra-judicial execution of a young woman and a boy in Chechnya 2001. 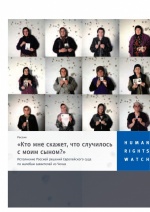 Russia loses Eight Cases from Chechnya at the Strasbourg Court