The European Court of Human Rights has found Russia responsible for the killing of a resident of the village of Galashki, Ingushetia, in 2004, as well as the ill-treatment of the victim’s relative, Russian Justice Initiative reported today. The applicants in Arapkhanovy v. Russia (no. 2215/05) are the close relatives of Beslan Arapkhanov, who was killed during a search of his house by a group of servicemen of the Russian Federal Security Service.

In a strongly-worded judgment, the Court found Russia responsible for the disappearance of two women and six men from Chechnya between 2000 and 2002, Russian Justice Initiative reported today. All eight disappeared in or around Grozny; the bodies of two women were found bearing signs of violent death several months after their disappearance, while the rest remaining missing. 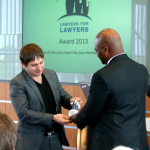 In June 2013 Chechen lawyer Magomed Abubakarov was awarded the Netherlands-based Lawyers for Lawyers Award. The prize is awarded to a lawyer or group of lawyers who have worked to promote the rule of law and human rights in an exceptional way and have been threatened because of this work.

On 18 April 2013 the non-governmental organizations Russian Justice Initiative (RJI) and International Protection Centre (CIP) sent an official submission to the Committee of Ministers of the Council of Europe (CoM) regarding the functioning of domestic judicial review procedures as a tool for implementing judgments from the European Court of Human Rights on Chechnya.